In this page, we are going to introduce our products but first let us start with the initial procedures of producing the petrochemical products:

What happens to crude oil when it enters the refinery?

We have a range of various petrochemical products, used in road constructions and roofing, transportation fuel and so on as a result of the refining process on the crude oil.

At first, the incoming crude oil is desalted. Desalting is the process in which the inorganic salts get removed from the crude oil.

The following operation which is carried out in the fractioning column is the breaking of the crude oil into its main fractions by atmospheric distillation at slightly above atmospheric pressure.

When crude oil is heated, the lightest and most volatile hydrocarbons such as naphtha, kerosene, and gas oil vapor and the heaviest ones remain. The vapor then is liquefied through another procedure. The heavier fractions that are left at the bottom of the column are called heavy residue. The residue which is heated up to 350-400 c and is sent to the vacuum distillation column is known as “long residue”.  The residue at the bottom of the fractioning column is the bitumen feedstock or vacuum bottom of which bitumen is manufactured.

In short, the distillation column results in producing petrochemical products such as paraffin, kerosene, gasoline, etc and also many other liquids, all from the fraction of the crude oil.

Crude Oil is the basic feedstock of which a large variety of petrochemical products are produced. Crude oil is also known as fossil fuel. The reason is that crude oil is derived from the residue of plants and animal corpses pertaining to millions of years ago. Crude oil is an unrefined material composed of hydrocarbon deposits and other organic elements. After being extracted, crude oil is sent to a refinery to get distilled in the fractioning column. This results in the production of lubricating oils, asphalt, jet fuel, heating oil, gasoline, diesel fuel and so on. 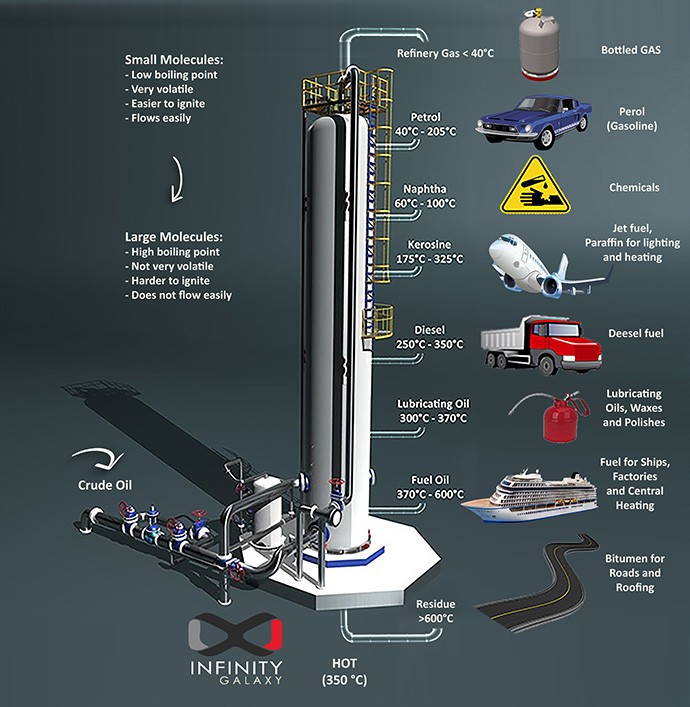 As a brief introduction on vacuum bottom, the heaviest derivative separated from the incoming crude oil within the vacuum distillation unit is known as vacuum bottom or VB. This residue is the main feed for the bitumen manufacturing unit.

Vacuum residue can be upgraded to prime distillate products by a recycling thermal cracking process, coking, deep oil fluid catalytic cracking or hydro-cracking or a combination of these procedures.

VR (vacuum residue) is considered as a key component in bitumen production.

For instance, Iraqi bitumen is made out of vacuum residue.