Bitumen emulsion is a liquefied type of  bitumen with a low viscosity.

By dispersing bitumen in water and adding an emulsifier, ordinary bitumen turns into a low viscosity liquid that can easily be used in a variety of applications, including repairing and maintaining roads, waterproofing, spraying, etc.

Emulsions make it easy to handle, store, transport, and apply bitumen at a lower temperature.

Since this type of bitumen is liquid, there is no need to heat it before application.

What is bitumen emulsion composition?

Bitumen emulsion is a combination of water and bitumen.

As the mixture of water and oily products quickly separate, a third component, known as emulsifier, is normally added to the mixture, in order to make it more stable.

Emulsifiers are used for making a mixture of water and oil dispersed in each other.

In addition to their ability to reduce the tension between oil and water molecules, emulsifiers have an electronic charge that affects the molecules of bitumen emulsion and lead to the categorization of it into Cationic and Anionic.

Cationic emulsifiers, for example, form a layer of positive charge around the bitumen droplets that prevent them from joining each other.

The electronic charge of bitumen emulsion decides on what kind of surface it should be used. 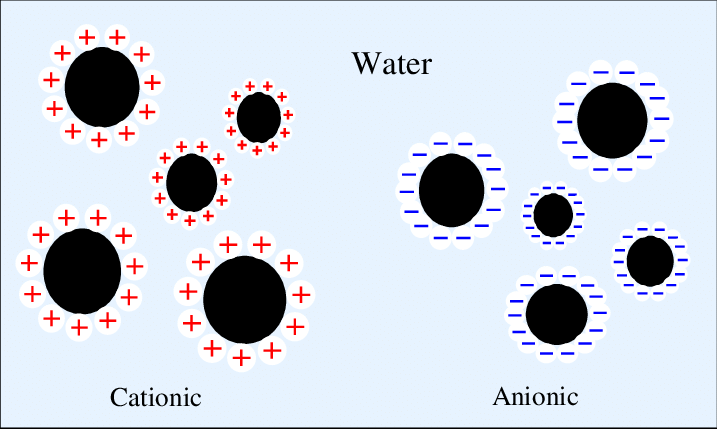 The difference between cationic and anionic bitumen emulsions

How is bitumen emulsion manufactured? 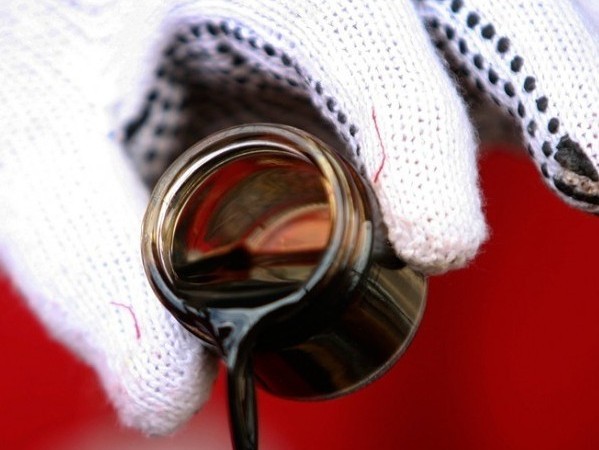 Bitumen emulsion is usually made using a colloid mill, which mixes bitumen with water and emulsifier. In this process, bitumen is milled into very small droplets that can easily suspend in the water.

With the addition of emulsifiers, bitumen droplets become more water friendly. Water droplets as well move closer to the tiny droplets of bitumen, making sure that the final bituminous product is stable enough.

In the manufacturing process, many factors such as droplets’ size, chemical addition, and the temperature of various components are accurately controlled.

The resulting bitumen has a consistent structure that makes it unique for various applications.

Various emulsions are classified based on two main factors:

In an emulsion, if the particles’ charge is negative, the bitumen emulsion is called Anionic and introduces itself with the letter “A”. Otherwise, the bitumen is known as cationic and has the “C” letter.

Technically, breaking means the evaporation of water, which makes bitumen strong enough for sticking to aggregates and setting on the place of application.

The time that is needed for bitumen emulsion to lose water and behave like an ordinary bitumen, is called the reactivity rate.

When bitumen emulsion is applied to a surface, choosing the right setting type is crucial. As previously said, there exist three types of the bitumen based on the setting time.

The first one is rapid setting emulsion which sets quickly in contact with aggregates, therefore, it is highly used in low surface of roads, particularly chip seals and surface dressing.

The second type is medium setting emulsion which is used in premixing of bitumen emulsion and coarse aggregate, particularly open graded mixes.

The last one is slow setting emulsion which sets very slowly. That’s why it is suitable for being mixed with aggregates of high surface area.

Slow setting emulsion is the most stable type of emulsion and can be used in dense graded aggregate bases, slurry seals, and recycling asphalt.

Another factor that can affect the reactivity of bitumen emulsion is the temperature of the surface onto which it is applied.

In hot weather, evaporation of water can accelerate.

Both cationic and anionic bitumen emulsions are categorized according to the setting time.

Look at the table below to find the various categories of bitumen emulsion and their globally standard names.

An explanation of bitumen emulsion prefixes and suffixes

Several numbers and letters are used to describe the characteristics of the emulsions.

The HF prefix shows that the bitumen emulsion polymer emulsifying agent creates a gel structure in the bitumen residue.

The gel structure allows a thicker bitumen coating on the aggregate particles. This thicker film makes the surface more resistant to oxidation from exposure to the atmosphere.

Bitumen emulsion is classified according to the international standards and their specifications through the bitumen standard tests are as follows:

What factors are important in grading bitumen emulsion?

The first vital factor for grading bitumen emulsion is the viscosity value.

The viscosity of bitumen emulsion is determined by its bitumen content.

An emulsion with small droplet size and a narrow distribution will give a higher viscosity. 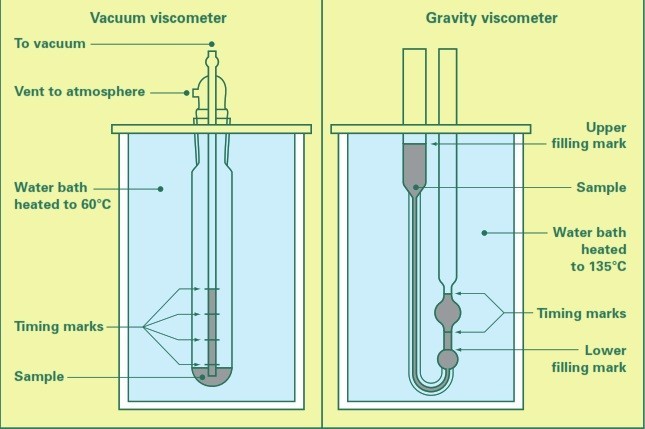 To indicate the bitumen resistance to breaking, a ductility test is done.

This testing system measures the extent to which a sample of bitumen can stretch before breaking.

A bitumen emulsion that has a ductility of more than 40 cm makes the surface of a road safe and strong to heavy traffic and do not break easily. In cold weather bitumen with low ductility value may get cracked.

You can read more about different types of standard bitumen tests here. 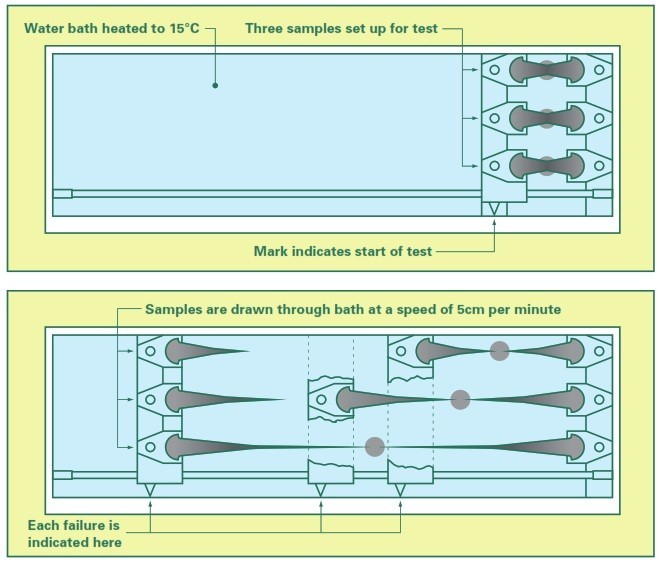 The softness level of bitumen is indicated by entering a standard needle into it.

The harder the bitumen, the better it is for use in hot temperatures.

The standard range of penetration can vary among different grades of bitumen emulsion. 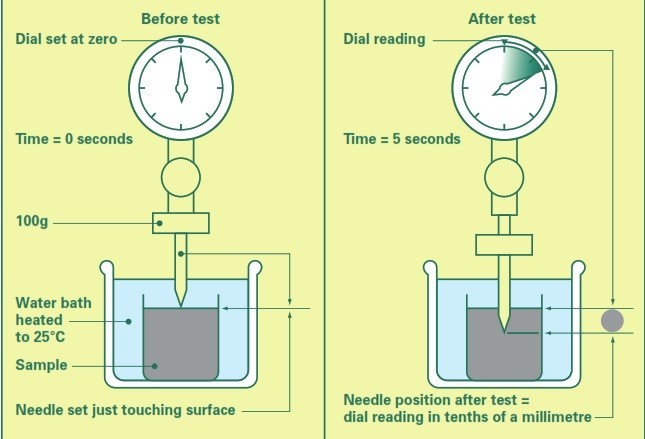 For testing the sedimentation of bitumen emulsion, a sample of bitumen is stored in a cylinder at room temperature.

The difference between two samples’ weight should not exceed 1 unit.

Two main factors that affect the storage stability of bitumen emulsion are viscosity level and the droplet size.

A bitumen with smaller droplets has less risk of settlement. 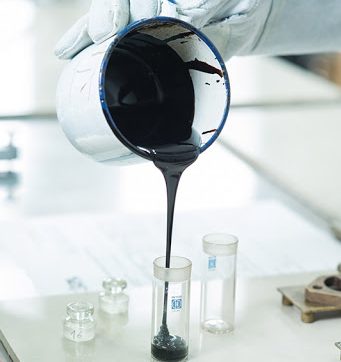 An emulsion's anionic or cationic character can be determined by the particle charge test.

In this experiment, two positive and negative electrodes are placed inside the emulsion.

one of the electrodes, conducts a DC current through the emulsion in the container.

30 minutes later, electrodes are examined to determine which electrode has been covered with bitumen.

In the early 20th century, bitumen emulsions were used mainly for spray applications, but nowadays they are also used for mixing and spraying in road construction and road maintenance.

This type of bitumen is used in various methods of road construction including tack coats, chip seals, slurry seals and micro surfacing.

More details about bitumen emulsion application are presented in the following.

Bitumen emulsion especially CRS-1 and CRS-2 are the best choice for tack coats between layers of asphalt pavement.

They can be used to heavily improve the strength and fatigue life of asphalt pavement at a very low cost and it's better to know that the use of cut back bitumen has been avoided.

For running tack coats, the best temperature is 10 to 15 degrees Celsius.

It is possible to use bitumen emulsion to renovate and waterproof old roads.

Chip seals are one of the most cost-effective methods of pavement preservation, since they protect underlying pavement from oxidation and aging.

In order to give a uniform texture to roads, engineers use slurry seals.

This mixture of bitumen emulsion, aggregates and mineral fillers is sprayed on the pavement to seal it and make the surface weather-resistant.

Slurry sealing is also used in the maintenance of asphalt pavements and it helps to reduce road surface damage due to bitumen oxidation, but cannot increase its structural strength.

Micro surface is another form of slurry in road construction, which is composed of polymer modified bitumen emulsion.

The existence of dense-graded aggregates in this mixture makes it stronger and more durable than a slurry seal.

A specialized machine is used to apply the mixture on existing pavements, which carries all components and mixes them on-site. The mixture is then spread onto the road surface.

Must read: A review of different types of bitumen used for road construction

Advantages of Bitumen Emulsion to cut back

Since bitumen emulsions are a type of soluble bitumen, they can have disadvantages based on the solvent.

If it is soap or water based, it has no disadvantages, only its price is higher, when the mixture is poured on the ground, the water evaporates and the bitumen sticks as a binder.

But if it is based on gasoline solvent, when it evaporates, toxic substances such as sulfur remain in the environment, which causes diseases such as cancer.

Sometimes, in a long-term storage condition or when temperature changes are large, it may become two-phase and frangible.

In the US, two central institutions have defined and standardized bitumen emulsion classifications:

There are societies and institutions throughout the world that have standardized how bitumen emulsions are classified, identified, and tested.

These foreign institutions look up to AASHTO and ASTM and adapt their findings to the local context.

For example, in Brazil, the Brazilian Association of Technical Standards is the organization that is responsible for standardizing testing and classifications for all types of materials. Like emulsions, they adapt quality standards set by the American institutions to the reality of Brazil.

Sample of several bitumen emulsion standards are as follow:

Bitumen Emulsion is packed in barrels that is different from new steel drums in thickness, dimensions and color.

This type of barrels are same as oil barrels that has the volume of 42 US gallons and is equal to 159 liters.

Other types of bitumen packing is not suitable for bitumen emulsion.

We can pack and export your needed bitumen in the shortest possible amount of time.

If you want to know more about bitumen emulsion and the purchasing terms, you can contact us or fill out our inquiry forms.